With US and Canadian Support, IOM Strengthens the Haitian National Border Police 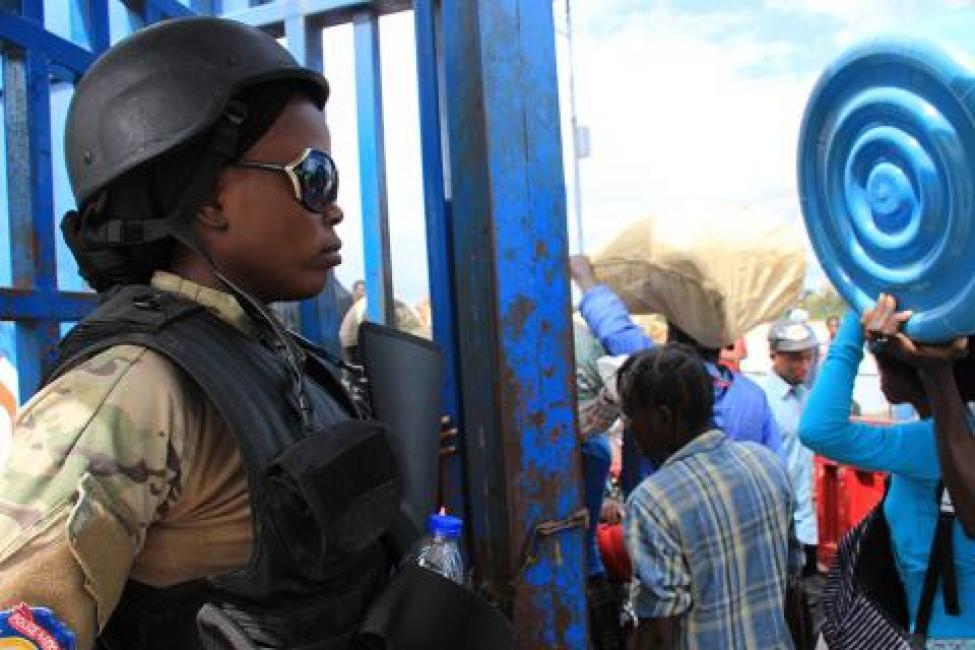 Port au Prince – The Governments of the United States of America and Canada confirmed this week their continued financial support towards the International Organization for Migration (IOM)’s work in the deployment of the Haitian Border Police (POLIFRONT). The additional funding from both governments amount to a total of USD 4.7 million, allowing for the full deployment of POLIFRONT at all of Haiti’s official border crossing points.

With this confirmed funding (USD 2.3 million) from the US State Department’s Bureau of International Narcotics and Law (INL) Enforcement Affairs and (CAD 3 million) from the Government of Canada’s Peace and Stabilization Operations Program (PSOP), IOM will be able to support the Haitian National Police in establishing a permanent presence at the two remaining official border crossing points of Malpasse and Belladere, to be completed by 2021. This is the third grant that has been awarded to IOM to support POLIFRONT in the fight against transnational crime at the border.

According to the Director of POLIFRONT, Commissioner Marc Justin, “The technical and financial support of the American and Canadian governments for the establishment of the border police in Haiti is a testimony not only to the effectiveness of cooperation in the fight against transnational organized crime, but also to their determination without borders to combat transnational crimes. The POLIFRONT is grateful to you.”

With four official and 96 unofficial border crossing points, the border between Haiti and the Dominican Republic is extremely porous and allow for the proliferation of illegal activities, such as trafficking and smuggling of migrants, contraband, and other forms of illicit trafficking.

PSOP and INL started funding IOM in 2017 to support the deployment of the first border police unit in Haiti. After the successful deployment of 110 officers in January 2018 at the border crossing point of Ouanaminthe (North-East Department), INL and PSOP continued supporting IOM in 2018-2019 to set-up a new POLIFRONT base in Anse-a-Pitres (South Department).

The main activities of this IOM intervention include construction or rehabilitation of POLIFRONT bases, support in the provision of vehicles, uniforms, patrolling and communication equipment, as well as capacity building to POLIFRONT officers through targeted trainings on checkpoint techniques, identification of false documentation, migrants’ rights, child protection and gender.

With only one year and a half of operations, POLIFRONT already demonstrated a clear impact on the field by arresting more than 50 migrant smugglers and 30 suspected human traffickers and referring over 120 suspected victims of trafficking and 250 unaccompanied minors to the protection authorities. In total, between January 2018 and August 2019, no less than 175 individuals were arrested, and more than a thousand victims were assisted or referred to local social services.

This additional financial contribution represents the acknowledgement of two key IOM Haiti partners on the importance of the Haitian police unit, which is delivering concrete and impressive results and will guarantee greater security and stability in the country.

“We are confident that this action, along with complementary projects at the border, will contribute to improve the security between Haiti and the Dominican Republic, and therefore reduce the impact of trafficking affecting the most vulnerable migrants. Both contributions reinforce IOM Haiti capacities in border management and migrant protection, and our support to Government’s partners in these domains,” said Giuseppe Loprete, Chief of Mission at IOM Haiti.

IOM Assists Over 10,800 Haitians Returned from the US, Mexico and Caribbean in Past Month