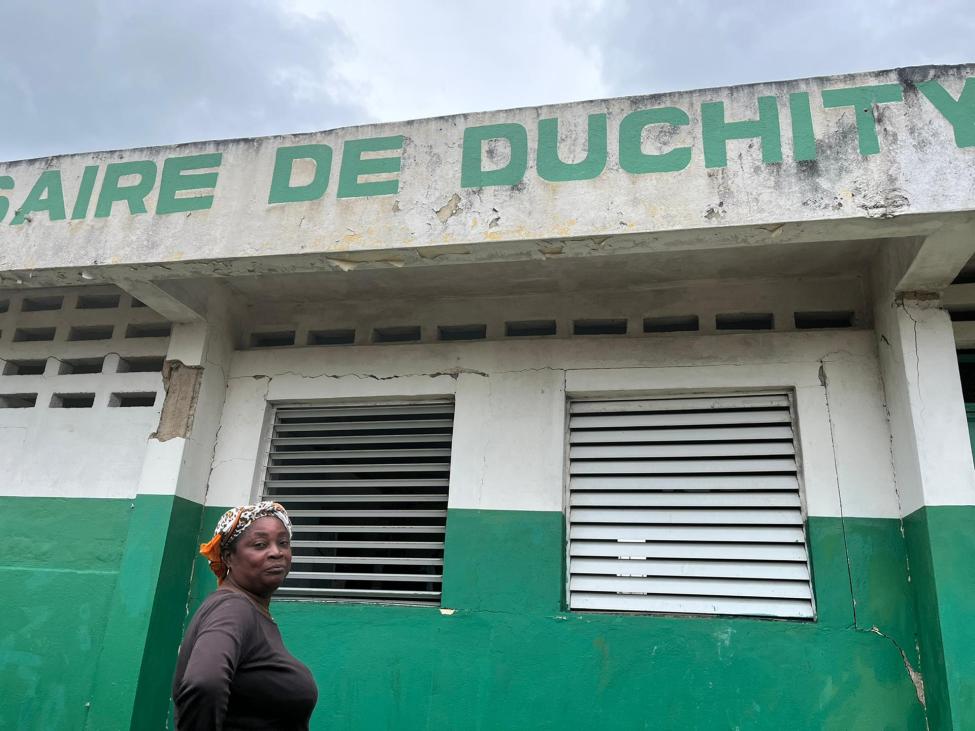 Natacha Lafontan is 49 years old and one of the three nurses living and working in the Centre de Sante de Duchity. She has been living and working there relentlessly for the past 17 years, serving around 1,200 families living in the commune. Everyone knows Natacha and praise her for her selflessness and desire to support others despite the many challenges faced at the clinic.

The clinic was one of the most damaged during the 7.2 magnitude earthquake that hit south-western Haiti on the 14th August 2021, rendering one of the two buildings completely unusable. Along with the two other nurses, a social nurse and guard, Natacha eats and sleeps in the only room where services can be delivered.

In addition to being on call 24/7 with few days of rest a year, Natacha and her peers are in charge of the administration and finance and the cleaning of the facility.

The facility does not have a resident doctor and does not have any medicines to give out to the patients who despite receiving a free diagnostic, often having to revert to traditional medicines and healing. It has indeed been challenging to support the community with such little resources. On top of those challenges, the facility’s electrical solar system was stolen in February 2021. This forced Natacha to regularly deliver emergency services in the dark, particularly the delivery of babies. Mothers who had not received proper follow ups would arrive in the middle of the night, desperately needing Natacha’s help to deliver safely their newborn.

Natacha recalls delivering a baby in front of the gate of the hospital, using her phone’s light to see through the darkness.

Through the Central Emergency Response Fund (CERF), the International Organization for Migration (IOM) conducted evaluations of the damages in some of the clinics and hospitals around the 3 southern department of Haiti in order to provide some support with infrastructure repairs and reinstatements of the facilities.

Although the Centre de Sante de Duchity was greatly hit by the earthquake, it continued to operate in a limited capacity and despite the challenges.

With CERF fund, the IOM decided to install a brand-new solar system consisting of 9 solar panels, 12 batteries of 225V, a regulator and an inverter in order to ease the life and work of the medical staffs working in the facility.

While this has not solved all the problems within the clinic, Natacha stated that she is very pleased with the installation and says that having power has changed her life in the facility but also greatly improved her work. She is now capable of responding of all the emergencies that occur over night with more comfort.

A story written by: